I promised to let you know when the correct version of my latest novel, Irregular Lives, is finally on line -- and IT IS ON-LINE NOW!

There is a shaggy dog story related to all this . . . actually something beyond shaggy dog, maybe hairless dog story . . . but I will spare you the sad drama. 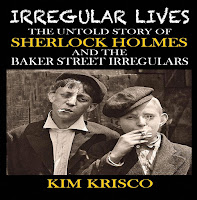 So, if you have held off on purchasing the Kindle version of: Irregular Lives: The Untold Story of Sherlock Holmes and the Baker Street Irregulars, you can move forward. Of course, please remember to post a review on Amazon. I have received 9 reviews thus far and am hoping to get the “magic number” 12 soon. When I have twelve, my book begins to show up on Amazon’s “other recommendations,” so it’s an important benchmark.

I thank all of you for your support in purchasing my books - ebook and paperback. Your generosity of spirit and encouragement is appreciated, and highly valued.

Looking ahead to 2017 which promises to me an “Irregular Year.”
Posted by sherlockholmes-thegoldenyears at 7:05 AM No comments:

A friend recently asked me: “With all that is happening in the world, and now in the United States, how do you justify spending your time and talent writing Sherlock Holmes stories.”

A wonderful question that only a true friend might ask. Not surprisingly, I did not have a ready answer, but I promised to reply later . . . now.

First, writing is not the only thing I do. I give time to my local community foundation, protect the sacred land Sara and I live upon, help my neighbors, and the others things that “normal” people do. (All true, but it sounds like an excuse.)

Second, I endeavor, in my stories, to speak to the issues and problems that plague our world. In SherlockHolmes - The Golden Years, the “under-story”, or theme, is eugenics in all its various forms. The story is set in 1913, but every one of the eugenic efforts, and atrocities, that existed then (I am sad to say) still exist today. I don’t beat my readers over the head by preaching. I simply bring the issue, and the related need to act, into their consciousness -- or maybe into their subconscious.

In Irregular Lives:The Untold Story of Sherlock Holmes and the Baker Street Irregulars, the under-story is the widening gap between the rich and the poor, and the psychology and philosophy that facilitates our rationalization of this situation. Obviously, this subject is more appropriate today than it was a century ago.

Yesterday, I just wrote the first 500 words for my next Sherlock Holmes novel -- yet to be titled. The theme for my new novel will be the oppression of women in all its obvious, and not so obvious, forms.

I hope you would agree that these issues are relevant and worthy of my time and effort. I want to think that my stories may be making an difference . . . registering in awareness of my readers, possibly stimulating action. I do not know, but that is my intention.

I have no doubt that I will be more politically and socially active in the coming year. Standing in opposition to the things that Trump, and his surrogates, advocate and strive to achieve is something I am compelled to do. A “child of sixties,” I would hasten to add: I can’t believe I am still fighting this f- - - - - g shit. 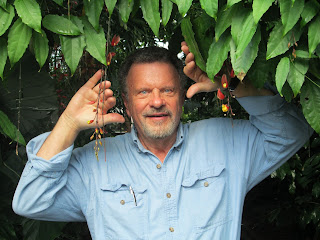 Writing is important to me. “I’m a writer.” But, what does that mean?

A writer is someone who is (hopefully) good at telling stories that other people like to read or hear. Why? Because they get a satisfying emotional experience from reading. They (safely) feel their feelings. And, so it follows that a writer is someone who feels deeply, and endeavors to share those feelings through their stories.

What I am feeling now, as a citizen of the world and United States, is deep sadness and fear for my fellow human beings everywhere. At the moment, it feels as though the darker forces are dominating and winning. In light of this, Sherlock Holmes would seem to be today’s perfect hero -- tirelessly fighting the dark forces. In the canon, those forces were symbolized by Professor Moriarty. In my first two books, they are represented by Ciarán Malastier and Maeve Murtagh.

My hope is that, as people read Doyle’s stories, mine, or the stories of many other excellent “Holmes authors,” they can hear Sherlock is whispering in their ear: “Remember. We must fight for what is just, and best in human beings, even to the point of putting our lives down for that cause.”
Posted by sherlockholmes-thegoldenyears at 5:14 PM No comments:

If you were thinking of buying it, please wait until this mess gets straightened out.  I will let you know.
Posted by sherlockholmes-thegoldenyears at 2:57 PM No comments: