You may have missed my website recently. I was hacked and had to take it down and rebuild it. And, I am happy to announce that my NEWwebsite is up and running.

It’s a great way to follow my efforts and message me, if you want. Of course, there are links to all my books on line, including the non-fiction books (yes, I have written non-fiction).

There are articles, news, and events. And stuff you won't find here. Like a pix of where Sara and I live: a 500 sq. ft. cabin on the North Fork of the Purgatory River (below). 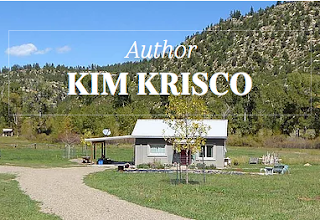 So, check out MY NEW WEBSITE and sign up for a monthly drawing -- a book a month goes to someone every month.

Would love your feedback and ideas. Let me hear from you.
Posted by sherlockholmes-thegoldenyears at 4:35 PM No comments:

Nine hundred and eleven Sherlock Holmes societies in over forty countries across the globe are testimony that Sherlock Holmes is truly a world-wide phenomena. Helping to slake the appetites of the millions of international Holmes aficionados, MX Publishing in London (the world’s largest publisher of Sherlock Holmes books) licenses the works of many of its authors to publishing houses and publications around the globe. I’m proud to say that several of my novellas have found their way to Italy—most recently, a story to a popular magazine. 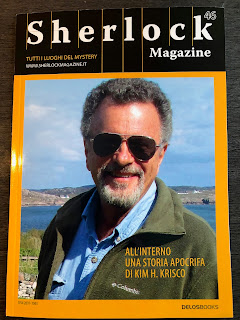 The May - 2019 edition of Sherlock Magazine in Italy carries one of the novellas contained in my first collection entitled: Sherlock Holmes - The Golden Years, Five New Post-Retirement' Adventures. The magazine cover also bears a photo of me. I am half Italian, so it seems apropos. The subtitle under my image translates: “Inside: The apocryphal story of Kim H. Krisco.

The tale to which they refer is: The Maestro of Mysteries. This story begins with a summons to Mycroft’s office and ends with a deadly chase in Undertown, far beneath the streets of London. The evil Ciarán Malastier escapes . . . but only into the next adventure in the five-story chronicle.

You don’t have to subscribe to Sherlock Magazine, you can enjoy this story . . . and four more, in softcover or kindle, at Amazon.
Posted by sherlockholmes-thegoldenyears at 6:53 AM No comments: