I recently received a message from someone who asked where I lived and why I was able to capture Tessa's love of nature in my recent novel: The Magnificent Madness of Tessa Wiggins. As instinct would have it, I started to write then realized that a single photo might be the most appropriate reply. Sararose, Bella our dog, and I take a morning walk everyday and today I took my phone to snap a pix. The cool fall weather has painted the land in shades of sepia and burgundy. 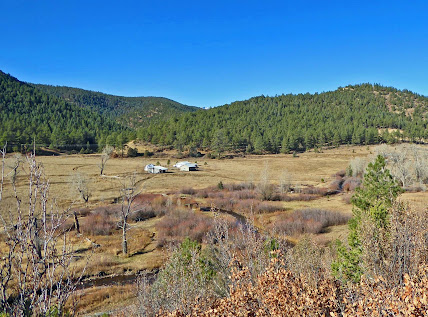 If you look closely you can see the entire campus -- our two little cabins, dome greenhouse, garage and shed. You can also see the river and the two bridges we built over it to get to the vast majority of the 40 acres which lies high above the river. There are no roads to the back of the property -- just the way Sararose and I like it.

Posted by sherlockholmes-thegoldenyears at 6:40 AM No comments:

Crime Thriller Hound Give A Nod

The Crime Thriller Hound website out of the UK recently posted an article I wrote along with a bio and nice plug for my recent novel. 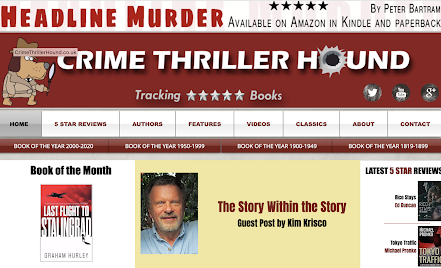 Check them out!  A great website for mystery book lovers.

Posted by sherlockholmes-thegoldenyears at 2:27 PM No comments:

A rare Sherlock Holmes collection has just been published by the MX Publishing in London.  The Improbable Protégé is a Limited Edition Run of only 100 hardcover volumes. Each book is numbered and can be personalized when you order at: MX Publishing. 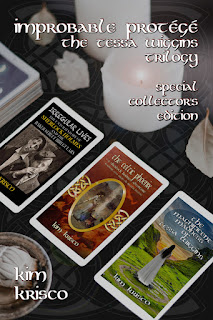 This Sherlock Holmes trilogy features his most beloved member of the Baker Street irregulars Tessa Wiggins. There singular relationship has largely been an untold story . . . until now.

Irregular Lives begins in post-WWI London, as Holmes retires. A mysterious photography exhibit catapults him back in time to early experiences with Tessa and other members if his urban army. But his reminiscences are merely a prelude to a thrilling adventure that begins when a jolly reunion with the irregulars erupts in tragedy.

The Magnificent Madness of Tessa Wiggins finds Tessa struggling with the spirit of a Druid priestess. Tessa defies treatment and her lover asks her childhood friend, Sherlock Holmes, to intervene.

If you have ever wondered who followed in the footsteps of Sherlock Holmes, this limited-edition book is for you.  Copies are counting down.

Posted by sherlockholmes-thegoldenyears at 1:41 PM No comments: