60 authors will contribute to the anthology and all royalties will go towards renovating Undershaw, the former home of Sherlock Holmes author Arthur Conan Doyle. The royalties from the project are to go towards the restoration of Undershaw, which will become a school for children with learning disabilities. 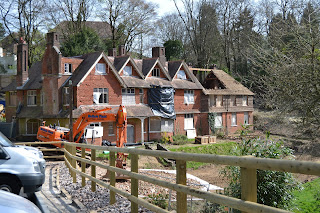 Undershaw is where Conan Doyle wrote many of the original Sherlock Holmes stories. The building fell into disrepair in 2009 when developers tried to carve up the house but were blocked by a determined group of Sherlock Holmes fans who fought the planning all the way to the high court. The group won an injunction in the high court. The developer appealed but that was quashed in 2012.

The new anthology will span three hardback volumes and cover 1200 pages, will go towards the new owners of the building Stepping Stones – a small specialist education provision – who are restoring it back to its former glory, including the restoration of Conan Doyle’s study. One of the pledges from Stepping Stones to their Sherlockian supporters is that outside term time they will be making the house accessible to fans as much as possible; allowing them to visit the study and look out the very windows Conan Doyle did when he wrote stories such as The Hound of The Baskervilles.

My new donated story is titled Blood Brothers and will be found in Volume III. “Blood Brothers” takes place in 1913, after Holmes is supposedly retired. Of course, we know this is not possible, as was made clear in Sherlock Holmes – The Golden Years, with its five new “post-retirement” stories.

Published by MX Publishing, the project is the brainchild of author David Marcum, who has written several collections of Holmes stories himself including The Papers of Sherlock Holmes. He has enlisted authors from all over the world, including Lyndsay Faye, Hugh Ashton and Amy Thomas. The initial target was to beat the previous record of thirty, but it grew to over fifty.

"The response has been incredible," says publisher Steve Emecz. “David insisted all the stories should be new, but traditional in format so they are all set sometime between 1881 and 1929 and feature Holmes and Watson in their original Victorian setting. I don’t think we will ever see a collection on a scale like this again. The authors are so passionate about Undershaw and its new role as a special school, which is why so many have taken part".

MX Publishing has also set up a Kickstarter to help cover the costs of the project. The goal is £2000 and you can pledge here.

The books will be available to buy from October 1st, and Kickstarter pledgers, however, will get them in September.
Posted by sherlockholmes-thegoldenyears at 3:18 PM No comments:

Worthy Adversaries All . . . for Sherlock Holmes

Professor James Moriarty's first and last appearance occurs in Doyle's story “The Final Problem,” where Holmes is focused on incarcerating Moriarty and his entire criminal syndicate. The Professor is determined to put an end to Holmes, and forces him to flee to the Continent to escape retribution. The criminal brain follows, and the pursuit ends atop the Reichenbach Falls where Moriarty falls to his death while fighting with Holmes. 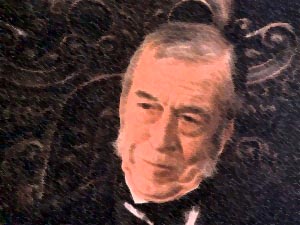 It is interesting to note that, while Moriarty actually appears in only one story, he looms large as Sherlock Holmes’s infamous arch-enemy. Most every writer of Holmes pastiches is therefore confronted with the challenge of creating a rival as diabolical as James Moriarty. From the reviews of my recent book, it appears I may have achieved that goal.

In three of the five novellas that comprise Sherlock Holmes - The Golden Years, Ciarán Malastier sets himself against Holmes and deals a blow that has the detective “down-for-the-count.” Holmes’s pursuit takes him “across the pond” and into the very heartland of America. When the two adversaries confront one another, Sherlock is forced to struggle with a darker side only hinted at in the original Canon.

In the last novella, “The Kongo Nikisi Spirit Train,” yet another “promising” adversary surfaces that harkens back to Moriarty himself.

Sherlock Holmes - The Golden Years requires the aging Holmes to be at the top of his game, and he rises to this challenge (as we know he will), as long as he draws a breath.

Sherlock Holmes - The Golden Years is available on AMAZON, and OTHER BOOKSTORES.
Posted by sherlockholmes-thegoldenyears at 8:16 AM No comments:

Heads up Holmes aficionados! Something good is coming your way -- the world’s largest collection of NEW Sherlock Holmes tales.

This project is currently in development by MX Publishing in London, so some of the details below may change before it goes to press this fall. Noted Holmesean author, David Marcum, is the editor. Inspired to support the Undershaw Preservation Trust’s efforts to save the Doyle home (http://www.saveundershaw.com/), David sought to create a collection of new Sherlock Holmes stories with ALL the proceeds going to this cause. You might recall that Undershaw was the home from which Doyle wrote most of the Sherlock Holmes stories. 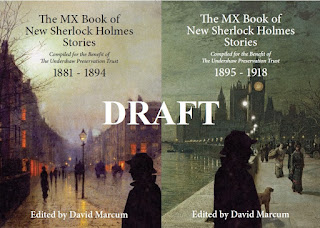 When Marcum began this effort, almost a year ago, he could not have anticipated that his idea would grow into a “master collection.” He began to contact known authors of Sherlock Holmes pastiches -- those that write in a manner consistent with the original canon. I was asked to contribute, and felt honored because my story will be among some of the preeminent Sherlock Holmes stories in recent time.

David Marcum’s outreach was wildly successful. Authors from the U.S., Canada, U.K., New Zealand, India and beyond agreed -- 60 authors in all. Each author will donate their royalties to the Undershaw Preservation Trust.

The anthology will be two volumes, each around 400+ pages. These editions will be 6” x 9” hardcovers with dust jackets. They won’t be designated Vol. I or II, but rather organized chronologically by the dates of the stories. The draft cover design (shown here) may change a bit. I will keep you informed as this wonderful project unfolds in the months ahead.

It is interesting to note Arthur Conan Doyle original collection of Sherlock Holmes stories totals 60 stories. So, this new anthology is “Sherlock Holmes Redux.”
Posted by sherlockholmes-thegoldenyears at 8:51 AM No comments: