As noted in the previous post, I have begun a new book. This one, more or less, continues where Sherlock Holmes - The Golden Years left off. It’s after the war. Holmes’s bucolic retirement is, once again, interrupted with a curious invitation. It begins like this . . .

HOLMES WATCHED from the window for some time as the messenger hoisted himself upon the pedals and pedaled his bicycle up the road. Not until his visitor had vanished in the haze did Holmes turn his gaze upon the envelope. He ran his index finger around the edges, and finally across the raised ink letters on the back flap—R. A. P. His eyes flashed upward.
Then, after an almost imperceptible intake of breath, he murmured, “Royal Academy of Photography. H’m.”
Curiosity is the wick on the candle that lights the way to adventure. Once, it was Holmes’s constant companion. He anxiously tugged at the envelope, pulling it open to reveal an engraved invitation:

Photographer T. S. Fields
invites you to the debut of his collection:
Irregular Lives

A small note was enclosed in the envelope as well. He read it:

The lives of the well-off have an arc, with significant achievements near the peak. The lives of the deprived hover barely off the ground. Their accomplishment lies at the bitter end—the fact that they survived at all.
Your life, Mr. Holmes, has a broad elevated sweep. And, as you reflect upon your journey, know that, with thanks to you and my mates, I was able to find a footing on clean pavement.
Please help me honour, and eulogize, those that served us both so well.
—T.S..F.

A wave of recollections, of people, places, faces and voices from the past, swept over Holmes like a tidal wave: his many encounters with the band of juveniles whom he had named “the Baker-street Irregulars.” 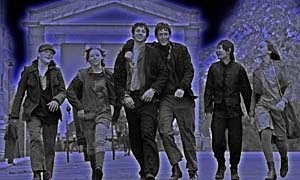 The true story of Holmes and the irregulars was never told, largely because they were on the scene primarily when Watson was not. As you can see, I know how this story begins, but not how it ends. So, if you have any ideas, please send them my way.
Thanks for following me.
Posted by sherlockholmes-thegoldenyears at 5:49 PM No comments: