Hot off the presses in India!

While the Sherlock Holmes canon does not have Holmes spending time in India, there is reason to believe he was there during his “missing years” -- after Reichenbach Falls. This might account for the huge number of fans the legendary detective in this land of unity and diversity. Fortunately, these fans can get the newest collection of Sherlock Holmes stories from a local publisher -- Jaico publishing. Sherlock Holmes - The Golden Years is for sale art about 259.00 rupee. 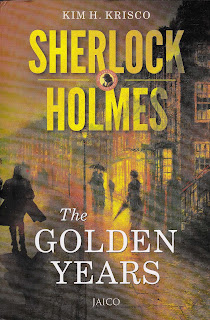 The Bonnie Bag of Bones that lead the infamous duo on a not-so-merry chase through London.

In the Curse of the Black Feather Holmes teams up with a gipsie matriarch, to expose a diabolical baby-farming enterprise.

Maestro of Mysteries begins with a summons to Mycroft’s office and ends with a deadly chase beneath the streets of London.

The Cure that Kills sees Holmes is in hot pursuit of Ciaran Malastier,  pitting himself against the Pinkerton Agency.

In The Kongo Nkis Spirit Train, Holmes and Watson travel to the Dark Continent to derail a “spirit train” that ensnares people’s spirit, and enslaves their bodies.

Check it out!
Posted by sherlockholmes-thegoldenyears at 5:59 AM No comments:

Why we love Sherlock Holmes

What is it that draws us to Sherlock Holmes and his wonderful tales -- the original canon, as well as the new pastiches?

As a writer of Sherlock Holmes pastiches, I have spent a good amount of time reflecting on this question. I don’t presume that I have “the answer”; but let me share where I am presently in my inquiry into what makes Sherlock Holmes stories so popular and sought after. 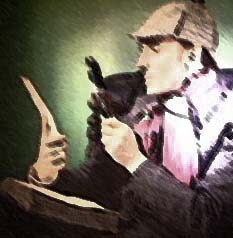 First, we love the character himself, a man both familiar and unfamiliar. Sherlock Holmes, like most of us, is far from faultless. His oddball Bohemian nature, his drug use, and his limited ability to empathize make him sympathetic, believable, and real. At the same time, his powers of deduction, attention to detail, and his ability to focus and block out extraneous information are what make him such so exceptional. Even so, while his extraordinary skill-level make Sherlock Holmes an master detective, they are all skills that any person can develop, and even master if they put their mind to it. Holmes is not a hero of the super-human, comic book variety, but rather of a delightful human variety.

Second, we love the stories themselves because they are short, easy to read, and almost always introduce us to new, strange, or unfamiliar people, places and situations. The stories do what all good fiction does, take us out of our world and put us completely into another - which brings me a third reason I believe we love Sherlock Holmes.

We love Holmes and Watson for the times in which they lived. While Doyle’s stories take us to some terrible places, the overall setting is Victorian and Post-Victorian England -- just before the world plunges deeply into the modern, technology-driven industrial era. Sherlock Holmes lived and worked in a simpler time and place - one that lures and invites us to escape today’s madding world . . . albeit for only thirty minutes.

Hopefully, you will find my analysis of the Sherlock Holmes canon above reflected in the five new tales in Sherlock Holmes - The Golden Years. I honored the character of Holmes and strove to be true to it. My stories, while longer than the typical 8,000-word Sherlock Holmes tale, are set in a time just before The Great War - a simpler time to be sure. However, in the end, you (the reader) will be the judge. And, I invite your feedback and criticism.
Posted by sherlockholmes-thegoldenyears at 4:29 PM No comments: