Sir Leander Starr Jameson (1853 - 1917), after studying medicine at University College, London, seemed destined for a great future as a physician in Britain, but poor health and a strong sense of adventure led him in 1878 to the diamond mines in Kimberley, in southern Africa. There he met Cecil Rhodes. They became fast friends and shared a dream to extend British rule from the Cape of Good Hope to Cairo. 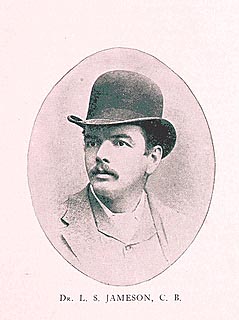 On Rhodes’s behalf, Jameson undertook missions to charm Lobengula, king of the Matabele, into confirming mineral concessions in present-day Zimbabwe for the British South Africa Company and opened the door for passage of the Caper to Cairo Railway. 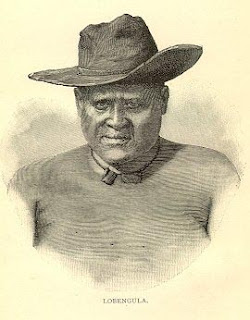 Jameson, Rhodes and Lobengula are just three of the dozens of actual, real-life characters that inhabit the new collection of pastiches entitled: Sherlock Holmes- The Golden Years. These three make their appearance in the Kongo Nkisi Spirit Train – the fifth and last story in the collection:

On a lovely summer morning in 1913, Leander Starr Jameson was ushered into the parlour of Watson’s London flat. What brought him there was an African mystery involving the Cape to Cairo Railway project - with 5,700 miles of rail track. As Jameson put it:

“The Cape to Cairo Railway has faced, and overcome, many obstacles over the last fifteen years—swamps, impenetrable jungle, the ravages of the white ants and termites, encounters with lions, elephants and other beasts, disease and unfriendly natives, to name a few. All of these have been overcome . . . until now.”

I (Watson) leaned forward in my chair. “What has put a stop to the progress now, Mr. Jameson?”

“The Kongo Nkisi. A native spirit-god.”

His report takes Holmes and Watson into the heart of the Dark Continent, and a confrontation with “the spiritless people.”

Leander Starr Jameson, also call "Doctor Jim” or "Lanner," guides Holmes and Watson into the jungle and, unknowingly, into the lair of the Kongo Nkisi spirit.

This tale is a fitting end to the five-part series of stories written in the style and voice of Sir Arthur Conan Doyle. If you’re seeking more authentic Sherlock Holmes stories – check out Sherlock Holmes – The Golden Years.  You can find it ON AMAZON and all on-line and main-street bookstores.
Posted by sherlockholmes-thegoldenyears at 11:19 AM No comments:

The man who created one of the most rational and grounded characters in the fictional world, Sir Arthur Conan Doyle, believed that he and others could communicate with the spirits of the dead. Indeed, Sir Arthur, in his later life, was a staunch advocate of Spiritualism.

For nearly 30 years, Sir Arthur researched, investigated, and promoted Spiritualism in its many forms. This quest brought Houdini and Conan Doyle together in 1920. They became fast friends and even vacationed together in Atlantic City. But, while they were personal friends, they were hardly allies with regard to Spiritualism. Both men trotted around the globe: Doyle advocating Spiritualism, and Houdini debunking spirit mediums, fortunetellers, and most anyone claiming supernatural powers.

This contrast is explored in new collection: Sherlock Holmes-The Golden Years.  In The Cure that Kills, Houdini meets Holmes and Watson aboard ship as they steam to America in pursuit of the diabolical Ciarán Malastier. Later, in The Kongo Nkisi Spirit Train, Sherlock meets Sir Arthur Conan Doyle at a séance in which Holmes subtly unmasks a “mostly fraudulent” medium called Margery.

You can read these tales, and three others, in Sherlock Holmes-The Golden Years – available on Amazon and most on-line and main-street bookstores.
Posted by sherlockholmes-thegoldenyears at 8:27 AM No comments: