Following in the footsteps of Conan Doyle, I have chosen a two-act play to be my next contribution to the ever-expanding canon (I’m currently wrapping up my novel Irregular Lives - coming out in the fall.). As is my style and custom, this new project has begun with research. It would not be surprising, then, to learn that my research began with the one Sherlock Holmes play that Doyle is credited with--entitled: Sherlock Holmes. 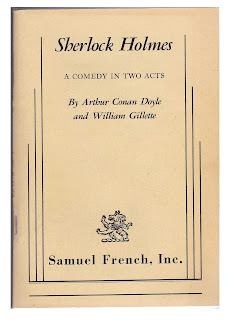 I italicized “credited” since this play is more the work of actor William Gillette than Conan Doyle. American theatrical producer Charles Frohman attempted to buy the rights from Conan Doyle. While Doyle did not relinquish the rights, it did inspire him to write a five-act play featuring Holmes and Professor Moriarty. As you can imagine, a five-act play would have been tedious, and likely too elaborate to produce on tour. Frohman’s feedback to Doyle included an observation that actor William Gillette would make an ideal Holmes. Doyle followed up on Frohman’s suggestion, and in the end, Gillette wrote what amounted to a new two-act play.

Holmesian fans would quickly recognized dialogue from the play that was lifted straight from several of Doyle’s stories: A Scandal in Bohemia, The Final Problem and A Study in Scarlet.

The plot is a rather “plain vanilla Holmes tale” in which Holmes is pitted against Moriarty. It involves helping a beautiful, young woman who seeks to revenge on a royal personage who wronged her in a love affair (think A Scandal in Bohemia). Her sister, who died of a broken heart had keep letters and photos of a nobleman who now wants them back. Moriarty and his gang, seeing a great opportunity for blackmail, attempt to steal the incriminating evidence from the young woman.

The play opened in New York City on November of 1899, and ran there for 260 performances across the U.S.  It then moved to London's Lyceum Theatre in September 1901 where is ran for nearly 200 performances in various theaters in the UK. Thereafter, it was revived, from time to time, by William Gillette over the next decade.

It is well known by Holmes aficionados that, in the entire 60-story canon, Holmes never says: "Elementary, my dear Watson,” however, it does appear in this play. This would explain the persistence and popularity of what some might say is the most famous of Holmes’s lines. It was also Gillette who introduced the famous curved meerschaum pipe.

The two-act comedy Sherlock Holmes is a quick read -- thank heaven. If I had to rate it today, I would give it only two or three stars. From a plot standpoint, it does not measure up to most of Doyle’s stories, and the dialogue is flat and predicable. All that aside, it was the ending that caught me off-guard. Holmes, having only seen the young heroin on two occasions (scenes) before the last scene, declares his love to her in Watson’s company. The finals curtain falls with Holmes kissing his new love “on the mouth.”

There are other Sherlock Holmes plays out there, and I will undoubtedly read all of them. But at this early stage, I can only say that the Doyle-Gillette play has inspired me to dive, wholeheartedly, into my new project with the hope that I might do a better job of bringing Sherlock Holmes to the stage.
Posted by sherlockholmes-thegoldenyears at 9:19 AM No comments:

The irregulars: The Untold Story

Within the 60 Holmes in the original canon, the urban army known at the Baker Street irregulars appear only three times: In two novels, A Study In Scarlet and The Sign of the Four, and later in The Adventure of the Crooked Man. 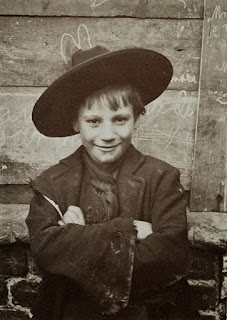 In these stories, the irregulars were led by an boy called Wiggins, whom Holmes paid a shilling per day plus expenses, with a guinea prize (worth one pound and one shilling) for a vital clue. It was clear that there were many boys within the irregulars, and possible a girl, but none of the others were distinguished in Doyle’s writing. As an emerging Holmes scholar, it seemed likely to me that the irregulars played a larger role in Holmes’s investigations, and is life -- particularly as Holmes aged. In my next book: Irregular Lives: The Untold Story of Sherlock Holmes’s Urban Army, I explore the singular adventures that Holmes and the irregulars shared over several decades.

You will, of course, find Wiggans, but also the other, previously unnamed members to street Arabs like Ugly, Snape, Archie, Kate, Ruck, and Tessa -- Wiggans’s little sister. This book will wrap a series of vignettes in a larger tale that unfolds just after WWI, when Holmes is 65 years old.

Irregular Lives: The Untold Story of Sherlock Holmes’s Urban Army not only makes for some exciting mysteries and adventures, but also gives the reader a peak at what was called “Darkest England”-- the one million desperately poor residents of London in 1919. These retched people comprised 15 percent of the city’s population. Ironically, today London’s poor represent an even greater portion of the population. Not much progress in one hundred years.

My hope is that this newest book will be out in the fall. In the meanwhile, if you haven’t already done so, you might check out Sherlock Holmes the Golden Years – on AMAZON where you can get a peak at some of the irregulars who will reappear in my new book. BTW: Sherlock Holmes the Golden Years is now available as a wonderful new audiobook!
Posted by sherlockholmes-thegoldenyears at 8:43 AM No comments: